This political documentary presents the four horsemen of the modern apocalypse: an untethered financial system, rising global violence, poverty, and environmental catastrophe.  These are the forecasters of doom for the empires of history.

Is the western “empire” faced with its own apocalypse? 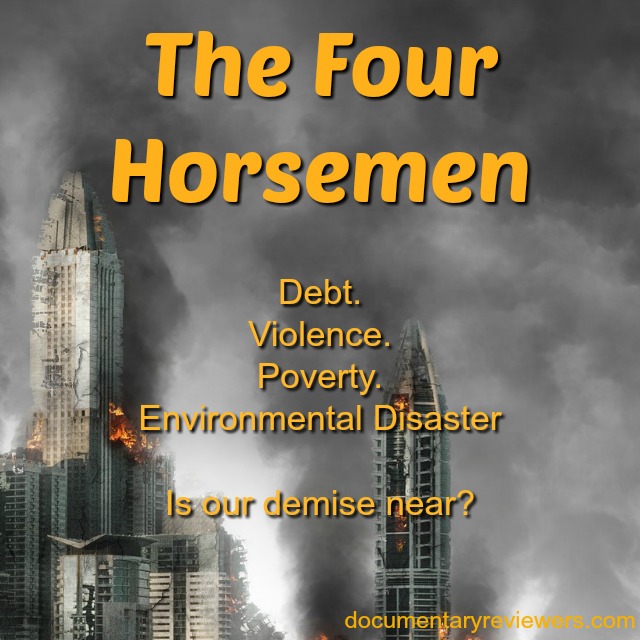 If the title itself wasn’t foreshadowing enough, the Four Horsemen is a documentary that provides a perspective of the declining lifecycle of the western world.  Ok, I sugarcoated it.  It is literally predicting the quick demise of it!

Through the lens of 4 “horses” or omens that spell disaster for everyone, the creators draw parallels between empires of the past to the current state of the western world.   Do you crave lavishness?  Objectify sex? Pursue wealth at the expense of principle?  Cast away those in a different economic class?  The trends may be against us.

Through interviews with banking insiders and through discussion of how our economic machine works, the Four Hoursemen portrays itself as a testament against the modern way of our thinking.  It suggests ways in which elite asset-holders dominate the political landscape for their own benefit.

The creators got the fearmongering down on this one.   I mean, when you name the title after biblical symbolism for the apocalypse, it’s not going to paint a pretty picture!

The information in the documentary is fundamentally true and those truths can present systemic economic and social problems.   However, the conclusions drawn from those facts are a little stretched.

Although it may raise eyebrows to compare the U.S. to ancient Rome, the reality isn’t that clear cut.

A good test as to whether a documentary good versus pure entertainment is whether it will stand the test of time.  This one, I’m skeptical.  One reason: It leaves little doubt that there is an alternative.

Another example is the case of the national debt.  We all know it has been increasing at an alarming rate.  In fact, you can even see the debt clock in New York City.  So, does that mean we should burn our dollar bills or return to the gold standard?  No.  The reasons may not even be philosophical.

Has global violence really increased?  Same with poverty?  Maybe from a certain perspective and timeframe, but the evidence over the centuries is clear cut.  The truth is the opposite.

Now, don’t get this review wrong.  There is a flip side to this coin.  It did win awards after all!

Entertaining! Both educational and entertaining. The documentary broke down complex topics into bite sized pieces and brought well-done animation into the mix.

To re-iterate a previous point, it did have very real information. Having been already exposed to many of these concepts I still learned new things and thought of others a little differently.  Whether you agree or disagree on the recommendations or conclusions, everyone should still be aware of the how our economic system works and the theories behind it.

By no stretch of the imagination am I a Wall Street lover nor do I feel the need to “occupy” it.  However, I still had to maintain a healthy skepticism of the film’s apocalyptic viewpoint.  That’s not the only aspect of the film, though.  You can always learn something like I did.  The icing on the cake is that you can also be entertained while doing it.

Will this political documentary stand the test of time?  Well, everything eventually comes to an end, so technically yes. But, will the demise of the western world be based on the four horsemen?  I argue not, at least not in our lifetimes. 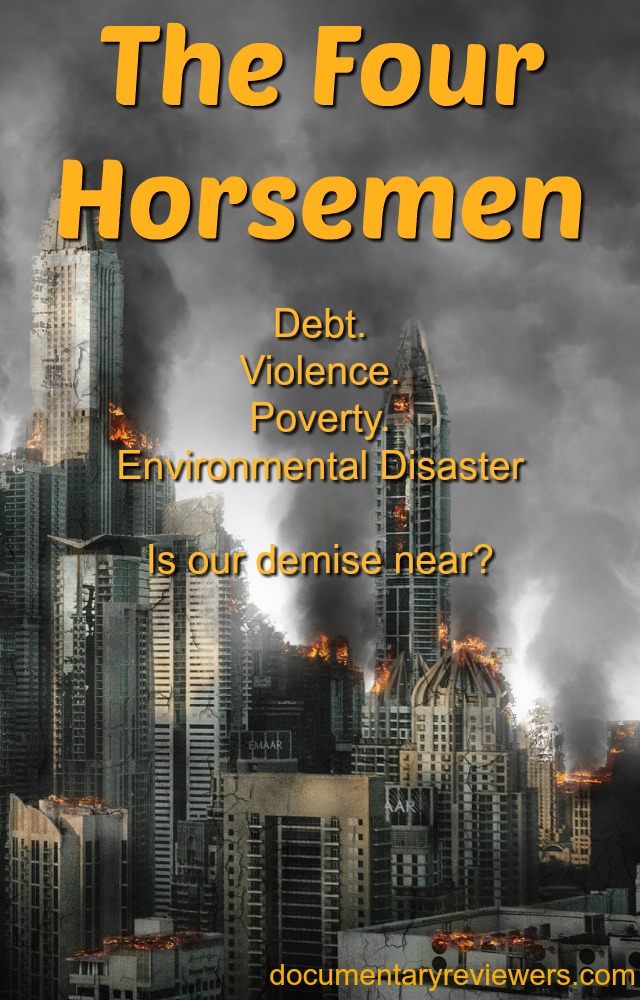